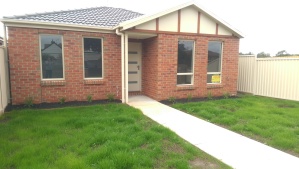 The visit to the building site in February was the last time that we were able to set foot inside the building. From that point on it was a monthly drive past to see what the progress was from the outside and only being able to guess what things were like inside. In early March, progress had continued on the exterior with some of the finishing touches added to the brickwork and roof, as well as the fencing starting to go up. The concreting for the driveway had also gone in and the leveling of the front yard had been done.

Brickwork and facade is complete

The front yard has been levelled out

Driveways have been completed

The supervising team gives their stamp of approval!

A month later in early April on a dreary and rainy Ballarat day it was time for the next sticky beak and things had really progressed to a stage which was getting so close to completion that I could smell it (or it may have just been the smell of the paint drying). The fencing was finished outside, exterior painting was complete, letter boxes were in and even the lawn had been seeded and had started to grow. And for the next month the emphasis was literally on watching the grass grow.

The new lawn is under the water somewhere

Fences and letter boxes are complete

A view up the driveway towards the front of the block

Looking over the fence into the backyard,

Again, one month later at the start of May it was time for another visit and as noted, it was all about watching the grass grow…which it had. Aside from that, the landscaping was completed and it was now time to wait for the official subdivision information to be approved and then a settlement date could be set. Fortunately that didn’t take all that long and FINALLY it brings us to the current day! No more posts about things that happened 6 months ago. Tomorrow I’m visiting the site to have my pre-settlement inspection before the keys finally get exchanged next week (all going well). After 3 months since last stepping through the front door I’ll finally set foot inside to see the finished product. Watch this space in a few days to see what the finished product is like!

The grass has certainly grown!

And there are plants in the garden beds

It’s as good as finished

The communal parking area for guests